Do you want to earn money from apps? Do you know what are the best money making apps?

Earning money from apps sounds too good to be true. But there are many apps that can actually make money for you. Though you will not be millionaires by using these money making apps but you can earn a good amount to pay off your monthly bills. Earning money with apps is a great way to earn some extra bucks. 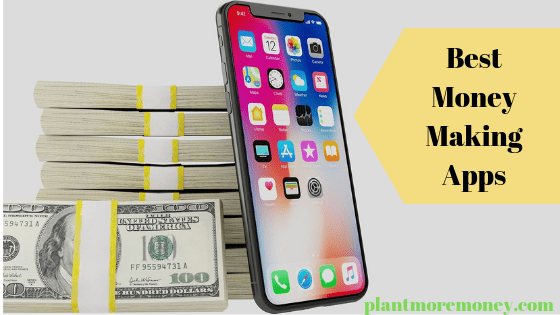 I spend almost 4 to 5 hours on my phone every day and I am sure most of the people do, for some reason or the other. If you’re just wasting your time on social media scrolling up and down then why not to utilize this time and start earning money online from apps.

There are tons of online money earning apps available worldwide and you can download these apps for android phones as well as for iPhone.

I am listing the best apps to make money online based on the ease of use and recommendations from the users. This way you can start earning without wasting your time trying each and every app among thousands of them. The best apps that make you money are as follows:

Swagbucks is an online paid survey site that offers you tons of fun and rewarding surveys on their websites and on the mobile app. It has its mobile app by the name SB Answer – Surveys that pay. 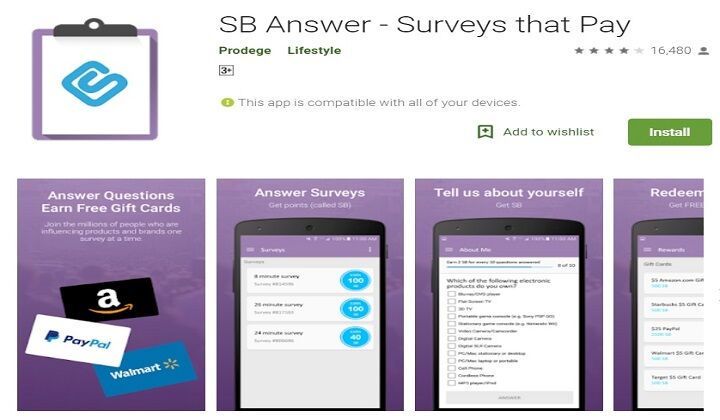 SB Answer rewards you with points called ‘SB’ for answering surveys and giving your feedback on local shopping visits. You can redeem these SB points for $3 to $25 gift cards for Amazon, PayPal, Starbucks, and others.

This is one of the best apps to earn money online and you can easily download the app either from the Google Play Store or Apple store.

Swagbucks has been given 4.1 stars out of 5 rating on Google Play which itself says a lot about this money earning app.

Toluna, a community of millions of members, is also a paid survey site that has its mobile application with the same name available in both Android and iOS. 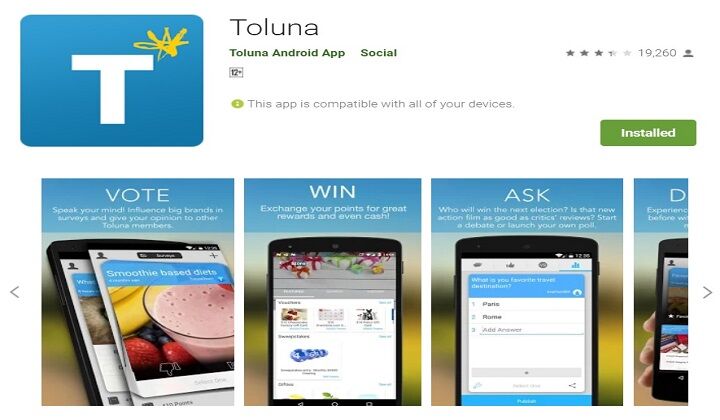 The app is totally free to download like any other genuine money making app and is downloaded more than 1,000,000 times from the Google Play store.

You receive points for your input which can be redeemed easily for gift vouchers as well as cash.

TaskBucks is an online app for residents on Indian Subcontinent. This app is one of the best money earning apps in India. 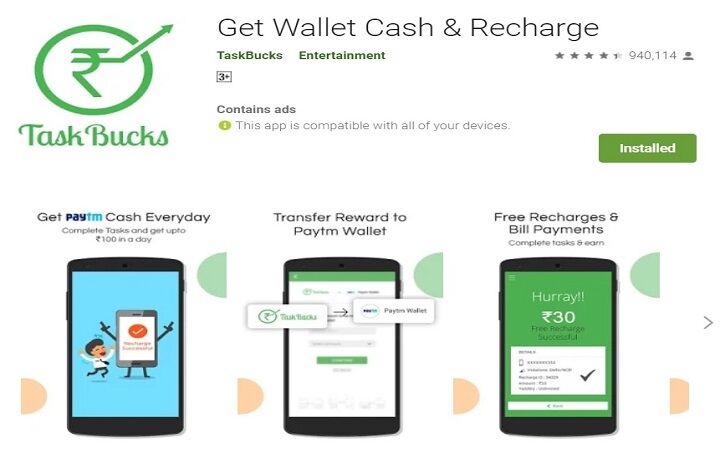 TaskBucks is among the most trusted and genuine money making apps for android phones. The rewards earned from this app can be used either to get free recharge or Paytm cash.

This legitimate money-making application can be downloaded from the Google Play Store. The App is rated 4.4 out of 5-star rating on Google Play and has over 33,000,000 downloads.

Ibotta is a free money earning app that gives you cash back on everyday purchases. This app provides you cashback on thousands of leading brands and retailers. 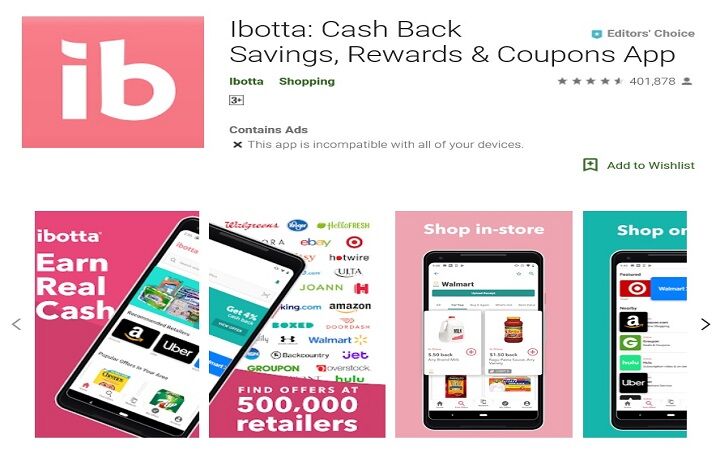 Ibotta has a feature called ‘Pay with Ibotta’ which gives you instant cashback for your purchase if you pay with Ibotta. You can earn cashback by simply checking the app before shopping, traveling and making any kind of purchases or by simply uploading the receipts on Ibotta.

You can withdraw your cash earnings via PayPal, Venmo, or various gift cards.

The app is available on both iOS and Android devices.

Google Opinion Rewards is an online survey app developed by Google surveys team. This is one of the best money making app for android phones. The app is also available for iOS users. 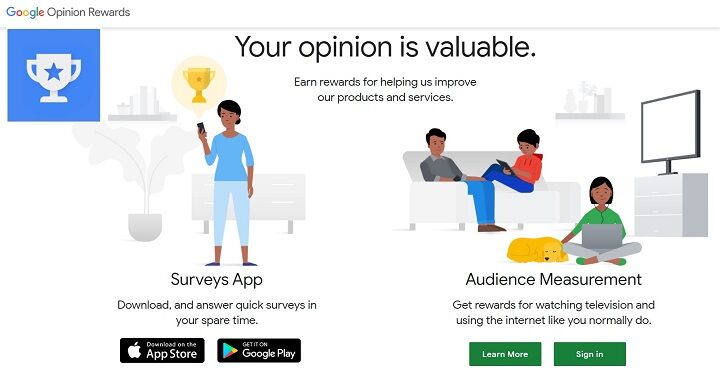 Android users can earn Google Play credits by completing simple surveys. You will receive a notification when a survey is waiting for you and which will be sent to you almost once a week. You can use these credits for making a purchase on the Google Play Store. The money earned by iOS users is paid via PayPal.

Google Opinion Rewards has rated 4 stars out of 5 on Google Play and 4.7 out of 5 stars on the App Store. This online money earning app is downloaded more than 10,000,000 times from the Google Play Store.

If you want to make money online by watching your favorite shows, movies and listening to your favorite songs then Viggle is the app you should download. 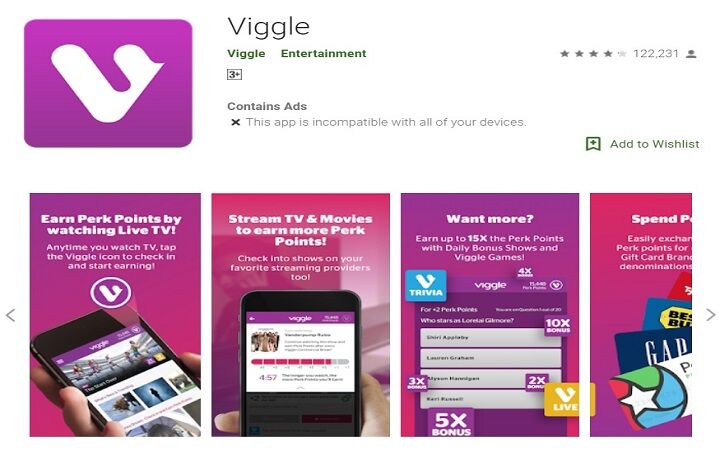 You get Perk Points as your reward for watching live TV or streaming program on providers like Netflix, Amazon Prime, and Hulu.

These Perk Points can be redeemed for Gift cards, prizes or even for cash. The app is available for both iOS and Android users.

Receipt Hog is another money earning app like Ibotta where you get paid to upload the receipts from your everyday shopping. 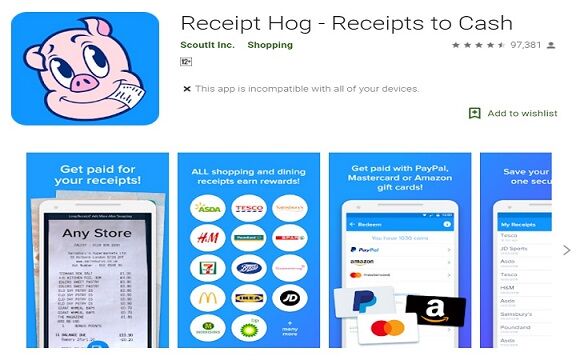 You can download the Receipt Hog App for both Android and iPhone.

Make Money pays you real money for completing simple tasks inside the app. This is one of the best apps to make money fast and easily. 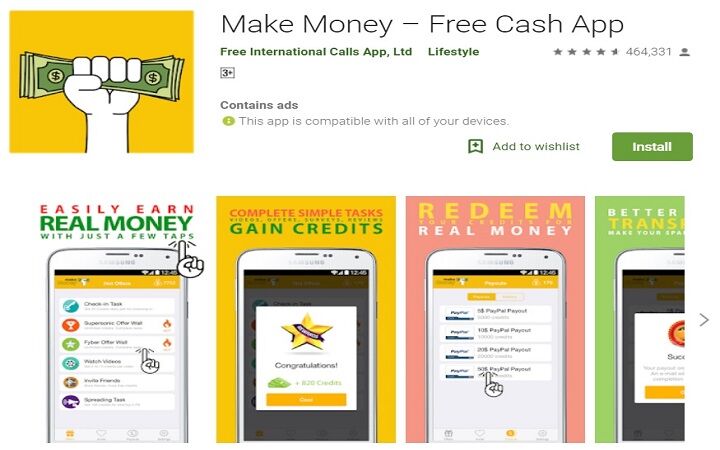 You will receive credit rewards for completing these simple tasks. On reaching the minimum cashout limit you can redeem your credit rewards in your PayPal account.

This money-making app is available for both Android and iOS users.

Survey On The Go is a very popular online money earning app which pays you to rate TV shows, movies, music, and advertisements, evaluate products and services and give your opinion on various events. 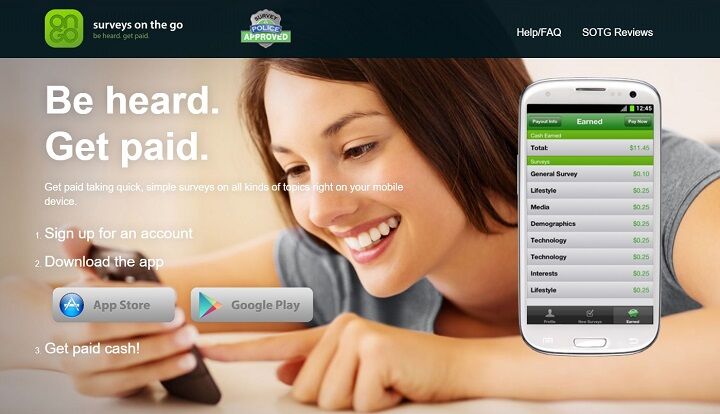 The good thing about this make money app is that they only pay cash and once you reach $10 you can cash out using your PayPal account, but the sad part is that the surveys are available only in the United States.

Ebates is another popular money making app to get cash back rewards like Ibotta.

When you sign up for your free account, you will get a $10 welcome bonus. You can explore the shopping deals and save with promo codes & coupons from Ebates. 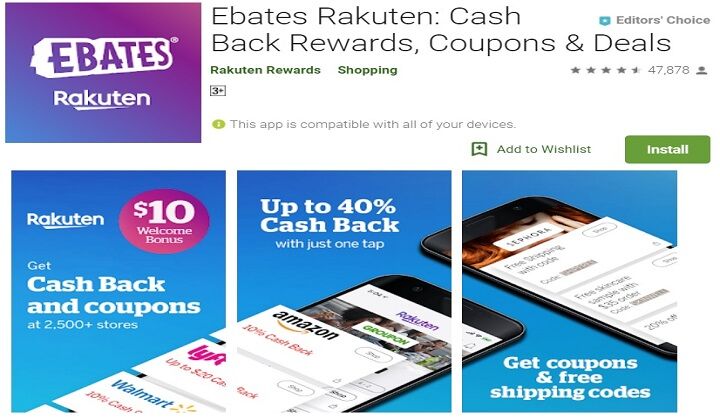 You can shop at 2500+ stores like Amazon, eBay, Walmart & many more and earn cashback up to 40% on your purchases.

The app is available for both Android and iOS users.

Shopkick is yet another app to get cashback and rewards for the shopping you already do. Cashback and shopping rewards can be earned online as well as at stores like Amazon, eBay, Hotels.com and many more.

The good thing about the app is that you don’t even need to buy the item. You can start earning with this online money earning app by just walking into the store, scanning items and receipts. One thing you need to keep in mind is that Shopkick does not pay in cash, they pay only via gift cards.

The app is available for both Android and iOS users.

Foap gives you an opportunity to make money with your photos and videos. You can upload your photo collection from your Smartphone and sell it to well-known brands all over the world. 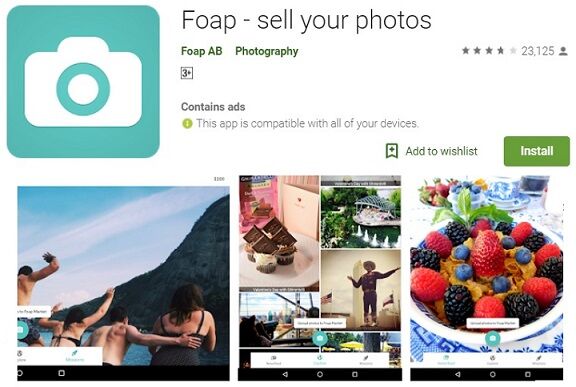 You can sell your photos to special projects of many top brands which they call Foap Missions. Every mission is rewarded with a prize where the prize money starts at $50.

You need to download & install the app (available for both Android and iOS) and create a web portfolio to show your photos to potential buyers. When the photos are sold, you will get a 50% commission on every sale. You can cash out the money earned through your PayPal account.

Slidejoy is an award-winning lock screen app that makes money for you. This is one of the best money making app for Android phones. Slidejoy app is available only for Android users.

You will earn rewards (carats) for using the lock screen which will show you the latest trending news and interesting personalized ads on your screen.

The best part about this money-making app is that you do not need to actually click and watch the ads. Swiping for more ads will not give you extra carats. Just download the app, register yourself and use your smartphone as you normally do every day.

This is probably the easiest way to make money online with apps. Once you earn 2000 carats (1000 carats = $1), you can redeem cash rewards either to your PayPal account or get gift cards from your favorite retailers/brands like Amazon, Walmart, Big Bazaar, Hotels.com and many more. 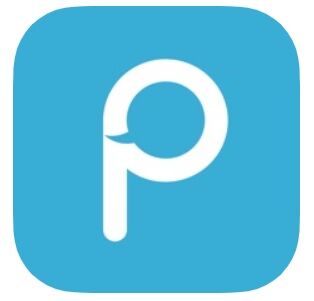 iPoll is another money-making paid survey app. You get paid to complete the iPoll Missions like visiting a store, taking pictures and testing products.

Whenever there is a mission available you will receive an alert. On completion of the mission, your iPoll account will be credited. The rewards can be redeemed from iPoll website www.iPoll.com.

This is a very popular online money earning app. Gigwalk allows you to work anytime and from anywhere. 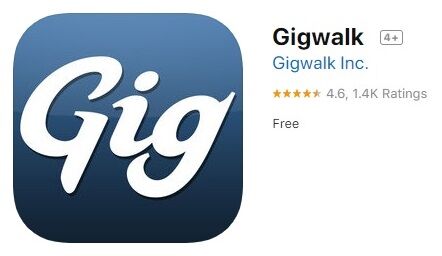 You can download the Gigwalk app to become a Gigwalker and find the gigs near you. Once you successfully finish the gig, money is sent to your PayPal account through the Gigwalk app.

Gigwalk is currently available in US, Canada, and the UK. The app is available for both iOS and Android users.

So, now you know the top 15 best money making apps to earn money online. These are the best apps to make money fast and are 100% legit. There is no scam at all.

You can download these apps for free on your smartphone and start making money with them.

So, which of these apps are you downloading and if you have already downloaded, how are they working for you?

If you like the article, share it with your friends and family so that they can also make money with Apps.

31 Best Ways To Make Money As A College Student

How To Make Money On YouTube (Step by Step Guide)

How To Find Virtual Assistant Jobs [Work From Home]

This website uses cookies to improve your experience while you navigate through the website. Out of these cookies, the cookies that are categorized as necessary are stored on your browser as they are essential for the working of basic functionalities of the website. We also use third-party cookies that help us analyze and understand how you use this website. These cookies will be stored in your browser only with your consent. You also have the option to opt-out of these cookies. But opting out of some of these cookies may have an effect on your browsing experience.
Necessary Always Enabled
Necessary cookies are absolutely essential for the website to function properly. This category only includes cookies that ensures basic functionalities and security features of the website. These cookies do not store any personal information.
Non-necessary
Any cookies that may not be particularly necessary for the website to function and is used specifically to collect user personal data via analytics, ads, other embedded contents are termed as non-necessary cookies. It is mandatory to procure user consent prior to running these cookies on your website.
SAVE & ACCEPT
0 Shares
Share via
Facebook
Twitter
LinkedIn
Mix
Email
Print
Copy Link
Powered by Social Snap
Copy link
CopyCopied
Powered by Social Snap